Everything the California Milk Processing Board Did is Wrong

I preface this post with a disclosure: I take issue with the tactics of the dairy industry in relation to marketing and policy. As a Registered Dietitian working in food systems and public health, I see first hand the National Dairy Council's (NDC)'s methods to ensure that milk and dairy remain an essential component of the American diet. They are given center stage at nutrition, school lunch, obesity and agricultural conferences and not coincidentally-- they pay the big bucks to sponsor such events. In fields where "science based" research is paramount to making policy and public health decisions, the NDC goes far to ensure research is favorable, that representatives are briefed and the audience is primed to ingest their propaganda.
I am frustrated with some nutrition professionals inability to consider the difference between the industry sponsoring research, the manipulation of current research into messages, and all out marketing campaigns. We fail to consider the body of research that is not being conducted, published or marketed to the same extent. My friend Nancy Becker recently sent me the Parachute Study, which perfectly illustrates this point.

I digress. The real point of this post is to criticize the California Milk Processor Board's new marketing scheme aimed at untapped milk buyers: men. I first heard about the sexist "Everything I Do Is Wrong" campaign while listening to the news on public radio (thanks NPR, as if the Cargill ads weren't bad enough?). "Every Thing I Do Is Wrong" gives men "suffering" with a PMS ridden women the answer: milk --and a slew of canned apologies. I think the board room of men that developed this campaign would be smart to start working on their apology.

Women traditionally make household purchases, especially food, but the CMPB "educates" their counterpart to purchase milk by stating that "milk can help reduce the symptoms of PMS." I have a feeling this one might backfire.

The site itself is a futuristic, busy hodgepodge of PMS indicators, an emergency "milk locator" that shows a map of nearby grocery and corner stores that sell milk, and scrolling apologies like " I apologize for letting you misinterpret what I was saying." Hmm CMPB, I'm not so sure I misinterpreted the utter repugnance of this marketing campaign? I assume that most Registered Dietitians (mostly made up of women, many working for the NDC) might also find this offensive. Just a hunch.

In an attempt to find the actual research backing the PMS claims, I came up largely empty handed, at least from the actual website. The "case study" section is "coming soon." The only thing the site does say is that "Milk helps reduce a majority of women's symptoms after 3 months of taking 1,200mg Calcium/day."

Huh? Do I drink milk or take a calcium supplement? Symptoms of what? 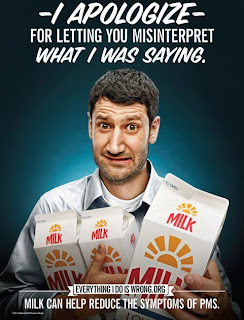 When you click around you find one study mentioned. "Calcium carbonate and the premenstrual syndrome: effects on premenstrual and menstrual symptoms. Premenstrual Syndrome Study Group." conducted by endocrinologist Susan Thys-Jacobs at St. Luke's-Roosevelt Hospital Center published in the American Journal of Obstetrics & Gynecology in 1998. Women ages 18-45 were randomly assigned to receive 1200 mg of elemental calcium per day in the form of calcium carbonate or placebo for 3 menstrual cycles. (Got milk?) Daily documentation of symptoms, adverse effects, and compliance with medications were monitored.All 4 symptom factors (negative affect, water retention, food cravings, and pain) were significantly reduced by the third treatment cycle.

No mention of milk in this study. I called the CMPB's office to ask some questions. There was no answer. I guess there are probably a bunch of PMS suffering women trying to call them today.
Posted by Ashley Colpaart at 10:51 AM