Reader Mari, fellow Friedman student and author of the cool blog Projects to Finish Someday, brought a cool site to my attention.

It seems the old propaganda posters are gaining traction as a mechanism for rallying people to help fight global warming and create energy independence. You can see people's new poster submissions at Green Patriot Posters or get inspired by some of the old WW2 posters on their site. It is interesting to me that many of the same themes of decreasing consumption, self reliance, and sustainability are the same issues we are facing today.

My favorites so far are:

Mellow Your Yellow by pocktlynnt -Conserve at home by reducing water wastage on unnecessary flushes. 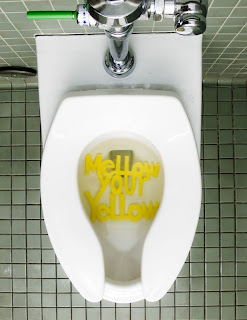 Change by BPaulR -Human contribution to global climate change now appears irrefutable. We now know that humans can affect global climate for ill, but we can affect it for good too. We have changed the climate before, we can do it again. Make better change now. 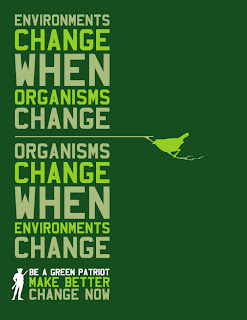 And this one, which really encompasses the theme of a propaganda poster:

Use Less by iheartjavelinas -Uncle Sam reminds us we've tightened our belts before and we can do it again. 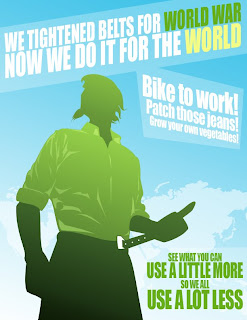 I would encourage any creative foodies out there to create some food and agriculture related posters. I collected some interesting facts from Sustainable Table and the Take a Bite out of Climate Change page( a project of the Small Planet Institute) that may help get your creative advocacy juices flowing:
To see more or vote on your favorites, visit Green Patriot Posters.
Posted by Ashley Colpaart at 12:30 PM

Great article, I'll have to check out Green Patriot Posters itself. If anyone would like to watch highlights from Dr Pachauri's lecture you can do so on the Compassion in World Farming website

See, this is why I pay taxes! The government develops something great like Tang or propaganda posters, and then the public applies the technology in creative and useful ways like making iodized water on a camping trip palatable or environmental awareness.