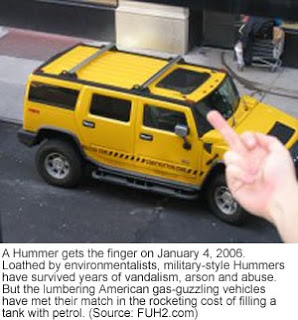 This may not be food related, but its good news to me!
Now what are jerks going to drive?

Loathed by environmentalists, military-style Hummers have survived years of vandalism, arson and abuse. But the lumbering American gas-guzzling vehicles have met their match in the rocketing cost of filling a tank with petrol.

Alarmed by a slump in demand for vehicles that consume vast quantities of fuel, Hummer’s owner, General Motors, is reviewing the future of the Hummer brand which was originally a civilian version of the US military’s armoured Humvee. The struggling Detroit-based carmaker said it was considering off-loading the business - and with US sales plunging, its prospects are cloudy.
Posted by Ashley Colpaart at 2:31 PM